Music has always been an integral part of Nicole Asensio's life. Here, she tells us how she took the leap to pursue her passion full-time.

Music, they say, is just part of some people’s DNA. Well, with Nicole Asensio, this is the literal truth. If you want to talk about DNA, this girl has the pedigree, both in the music industry and political arena. Her uncle, Cocoy Laurel, is a stalwart of the Philippine theatre scene; her mother, Iwi Laurel, was a hit singer in her own right in the 80s; and her grandmother, Celia Diaz Laurel, is another accomplished theatre artist, poet, and writer. Her great-grandfather was a past president of the Philippines and she’s the granddaughter to a vice president.

And yet, Nicole manages to handle herself with a quiet aplomb and sweet disposition. She is always friendly and considerate to people she has worked with, and there isn’t a bad word that has been uttered about her, except that maybe she’s too nice? Read on and see for yourself how amazing this rockstar of a singer is. 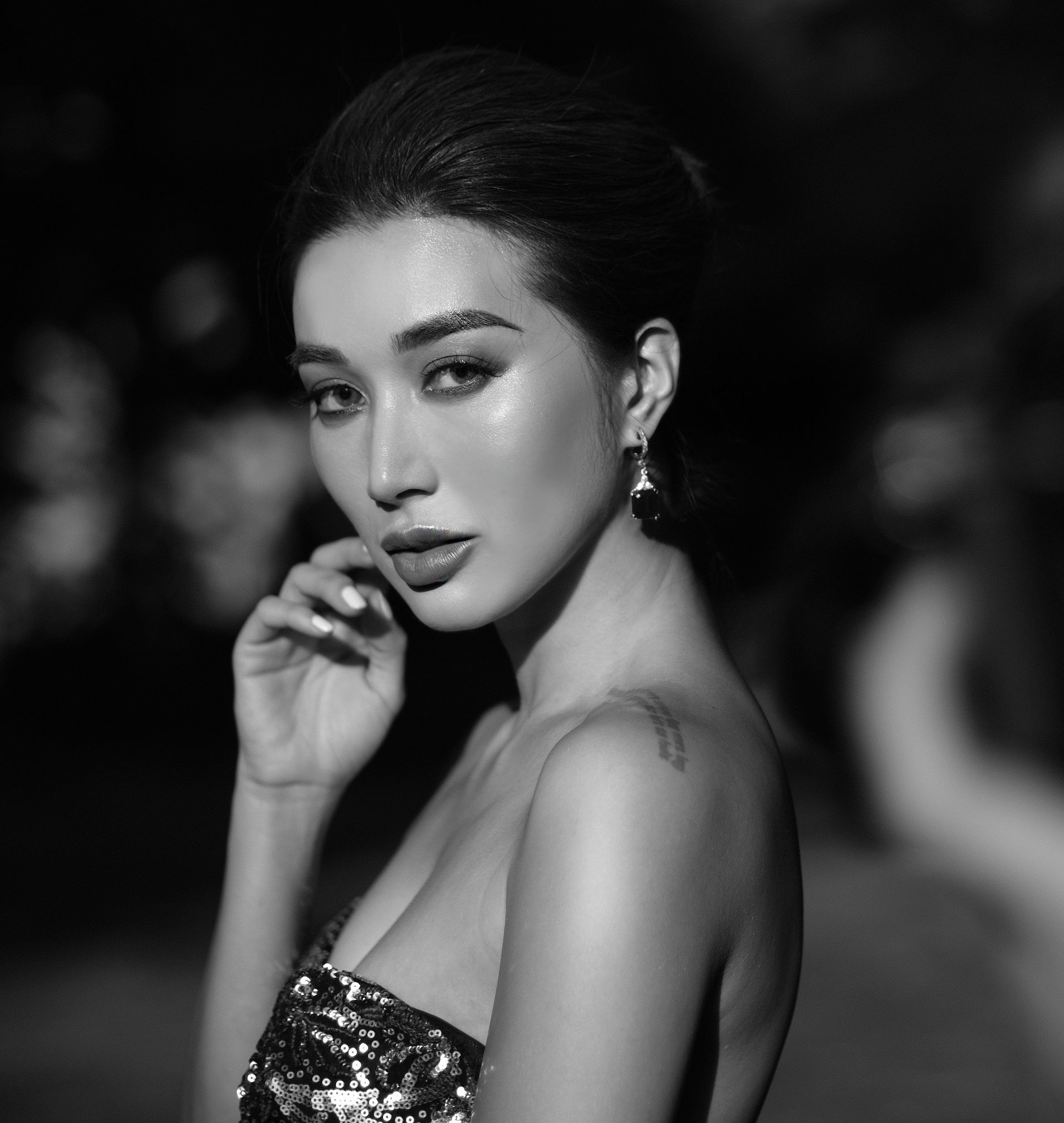 Give me a little background of yourself, notable things you want me to highlight.

I began performing at the age of 5 in Repertory Philippines. I would sometimes join theatre productions alongside some of my family members who are active in the theatre circuit, and cousin Denise [Laurel] and I were often co-performers in my childhood.

I took up literature in college and focused on creative non-fiction and literary criticism. It was then when I wrote the manuscript of my first book entitled Opera, My Master, My Slave at 21.

I had an affinity for rock music, but it went against my vocal training background. I secretly started dabbling in the band scene with my first band Crowjane, then later, an all-female hard-rock band named General Luna. I moved out from under my parent’s roof at 21 and it taught me how to work hard so that I could do what I loved most: music.

I was a working/touring musician while working jobs like being an English speech teacher, selling medical equipment, creating and selling kimonos and vintage clothing and working in a restaurant. Becoming a full-time musician and dropping my other jobs was a huge gamble, but I jumped in with nothing but faith, God’s grace, and utmost gratefulness because I was learning and growing immensely as a person.

Music has taken me to some of my dream places around the world. In the past 5 years, I got to perform in different countries like Spain, U.K. Hong Kong, Maldives, Vietnam, Thailand, Malaysia, Japan, China, Dubai, Qatar and around the Philippines. Nowadays, I specialize in corporate event performances and hosting. 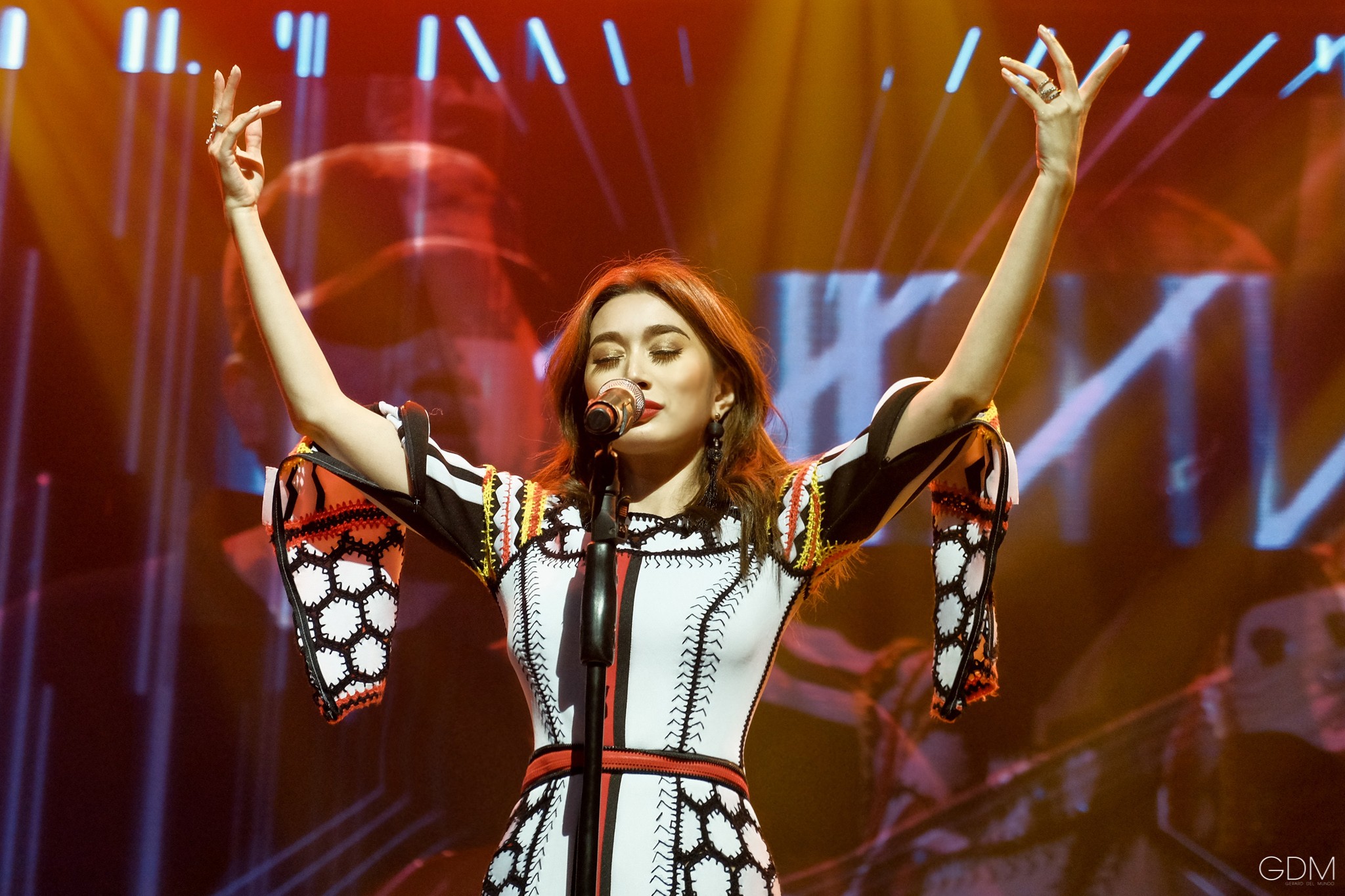 How did you get into the music industry?

My family has always been active in theatre arts and music, so I believe that from a young age I had adequate exposure to the music industry. It was my grandmother Fides and uncle Cocoy who taught me how to sing, classically at first. It was me who had a phase where I was reluctant to sing for a living. In college, I thought I wanted to be a lawyer or a journalist.

Instead, I went into rock and roll. Hahaha! 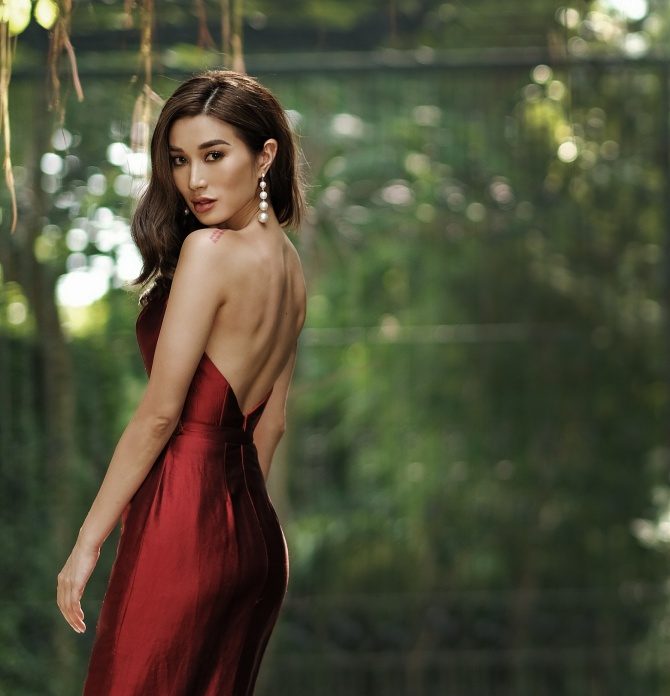 When did you decide to get into music? Who or what was your inspiration?

I would have to say my family is my first encounter and inspiration when it comes to music. I get a lot of my taste from my mom, we like the same music. I met a lot of great musicians through my mom.

Who are your musical influences?

I don’t know if they are my influences, but I just like to listen to them. Classically – my grandmother Fides, my uncle Cocoy, and a soprano I had the pleasure of meeting and singing for in Milan, Miss Angela Gheorgiu. 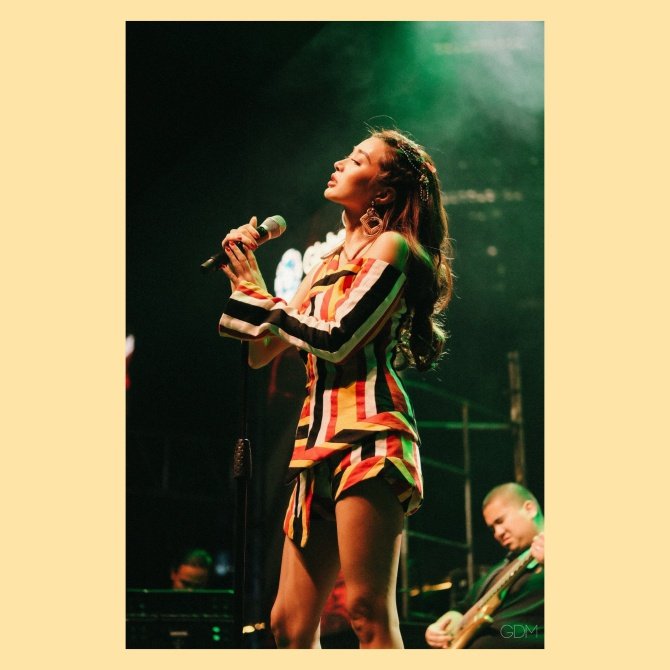 Nicole Asensio in her element. Photo by Gerard Del Mundo

I believe that inspiration awaits us in every corner. Sometimes it’s a person you run into. It could be a stranger or a familiar soul from years ago. They carry with them an energy you can’t resist; it sets your mind on fire, and sometimes you don’t really mind being consumed.

Sometimes it’s a story you’ll see unfolding before you. A peculiar man on the street with empty eyes and a suitcase in hand. His image will make you wonder how his day is going and what on earth he could be thinking or whether he remembers his own damn name.

Or it could be something mundane like what you had for breakfast. Or something massive, like being grateful you had breakfast at all.

Most of the time, the ever-present subject is resilience. The resilience of the human soul is such a fascinating, inspiring thing.

What would be your dream gig? 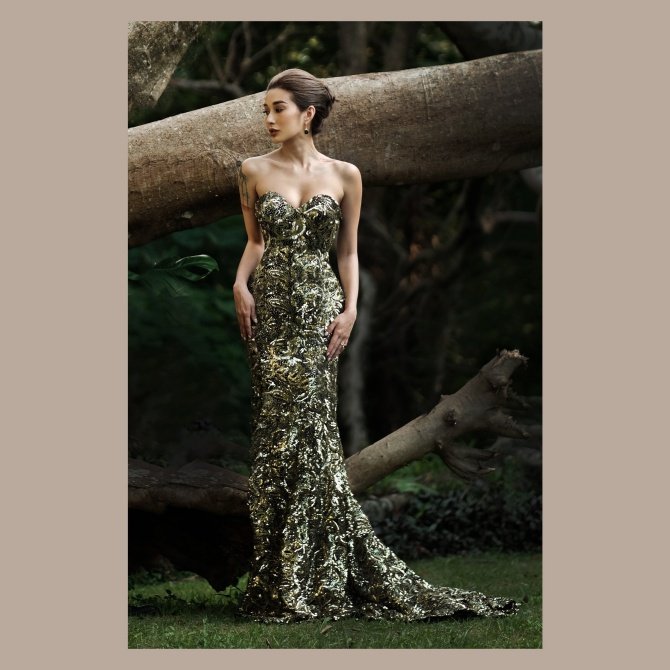 Who or what would be your dream collaboration?

What are your thoughts on the music today?

Music is becoming more and more collaborative, and because of that, it is breaking more barriers and blurring more lines, I think that is a positive thing. It’s always good to look back and trace the roots sometimes too, though.

Where do you see yourself in 5 years?

Are you working on anything new? An album?

Yes, I have begun writing again after dealing with the pains and traumas of my father’s death. I am working on another solo album and have been doing shows with a Jazz Bigband called Project 201 Bigband.

I also have a band with Michael Alba, Karel Honasan, Ira Cruz, Nikko Rivera, Kim Lopez, Michael Guevarra and another jazz duo alongside male singer Gian Magdangal. The side projects are plentiful and I am grateful for that.

Do you have any other hobbies? What are they? 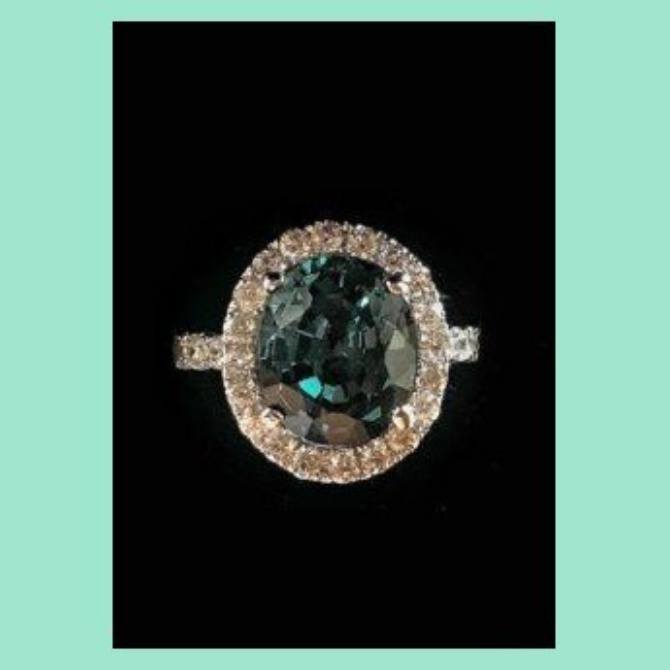 One of Nicole Asensio’s creations. An engagement ring.

How did you get into that?

When my grandfather and father passed away, I was left with broken pieces of gold and some stones, like loose clasp or broken chain etc. I decided to melt them down into a memorial ring that I can wear. This made me realize that I could create meaningful pieces that could be passed down from one generation to another. It made me want to share the meaningfulness of small treasures with other friends and clients. 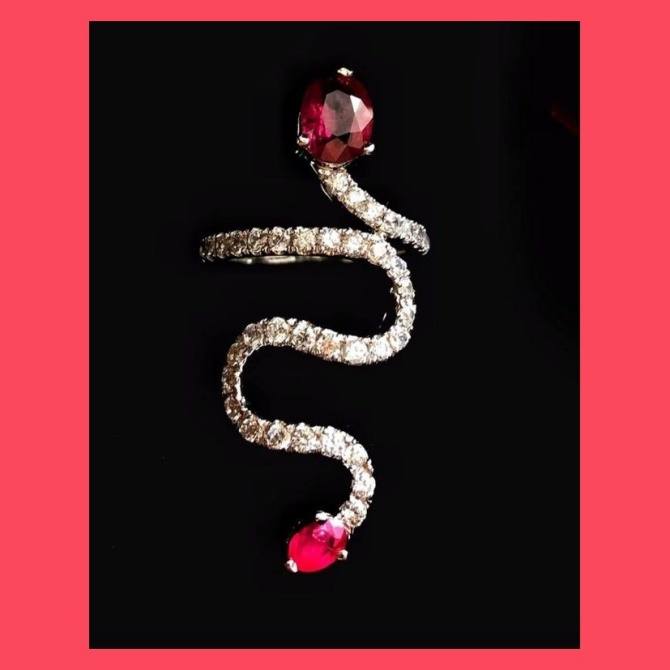 Another of Nicole Asensio’s designs.

Do you have any personal advocacies or causes you want to promote? Why are they important to you?

HIV cases are multiplying fast, and it is mostly because of the lack of education, stigma, and lack of accessibility to testing and treatment. That is what #TheRedWhistle and #SaveSexy aim to do — give free testing to anyone (it only takes 20 minutes), as well as counselling and medical advice.

I feel similarly about suicide prevention and mental health. For many generations, people were taught that mental health issues were not to be taken seriously, and that we should just “grow up” but there is a lot more underneath. Everyone comes to a point in life where we are the ones who need someone’s help. Why should anyone be ashamed to ask for help if we genuinely need it? And if someone around you genuinely needs help and you are in a position to help, think of all the wonderful things you could do for someone who may not have anywhere else to go.

What piece of advice has stuck with you throughout your career?

My mom telling me: check your motives before you do anything. Your pure heart will be rewarded in God’s perfect timing. 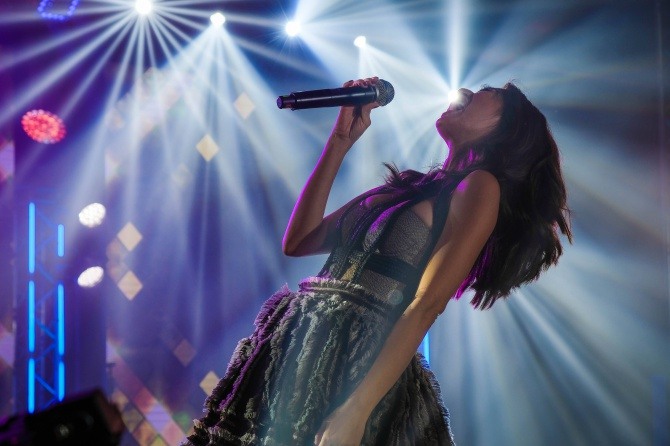 What Nicole Asensio does best. Photo by Gerard Del Mundo

What are your top ten albums of all time?

In no particular order: