What Happened Before The Dolce And Gabbana Show That Outraged Asians?

Unless you’ve been living under a rock, you may have seen some of the OTT Dolce and Gabbana fashion shows online. Each season, the Italian luxury brand doles out a cultural extravaganza at different cities and countries. Only this time it completely backfired on them.

Headed by Domenico Dolce and Stefano Gabbana, the brand was slated to organise a large-scale fashion event in Shanghai on November 21. But The Great Show, as it was called was cancelled. This, after the Chinese government shut it down following an alleged ‘racist’ video and then remarks by Gabbana.

The move has shocked fashion critics across the globe given that it was to be the brand’s grandest show ever in its 33-year history.

Dolce And Gabbana Fashion Shows No Longer Welcome In China

While these videos have been taken down from the official D&G handle, they are still up on the Diet Prada handle, with English subtitles (watch above).

The controversy that started this fiasco came from videos that were posted on their official Instagram page on November 17. The videos show a Chinese model struggling to eat pizza and cannoli with chopsticks. The narrator then asks: “Is it too big for you?”

This video unleashed the wrath of fans who deemed the video, racist. And then Gabbana’s previous racist remarks came tumbling out of the past, adding to the brand’s misery.

Gabbana Even Had A Tiff With An Outraged Fan, This Fanned The Controversy Further

There was even an altercation between Gabbana and one Michaela Tranova that reportedly ‘exposed’ Gabbana’s attitude.

Without mincing his words, Gabbana responded to Tranova’s jibe by saying: “if the Chinese feel offended by a girl who spells pizza or pasta with chopsticks means that those Chinese feel inferior.”

Dolce And Gabbana Render Apology. But Is It Too Little, Too Late?

Soon after, the brand apologised for the video and for the alleged racist remarks. They said that Gabbana’s handles were hacked. But to no avail.

“We are sorry for the impact and harm these untrue remarks have had on China and the Chinese people,” their statement said.

Gabbana himself shared screenshots of the conversation denying that was him.

“My Instagram account has been hacked. My legal office is working on this,” he captioned the post. “I love China and the Chinese Culture. I’m so sorry for what happened,” he added.

In fact, the two even posted a video of themselves apologising for their remarks (see below).

But they weren’t shown support.

Several celebrities such as actress Zhang Ziyi and Chinese e-commerce firm Yangmatou have also decided to boycott the brand. Many models and talents also came in support of their country and boycotted the designers.

For instance, model Estelle Wong wrote in an Instagram post: “Glad to see that most of the talents that were supposed to walk your show in Shanghai stood up for their country and said no to your stupid shit…”

This recent development has not only hurt the brand’s standing in Asia. But also, of those who were to be associated with the brand for this particular show.

Along with her entire family, Chloe travelled to Shanghai in the hopes of becoming the first ever Singaporean to walk one of the Dolce and Gabbana fashion shows. Her dress was all set and ready to be worn. But her hopes of representing her country were shattered when the show was cancelled just six hours before it was to begin. 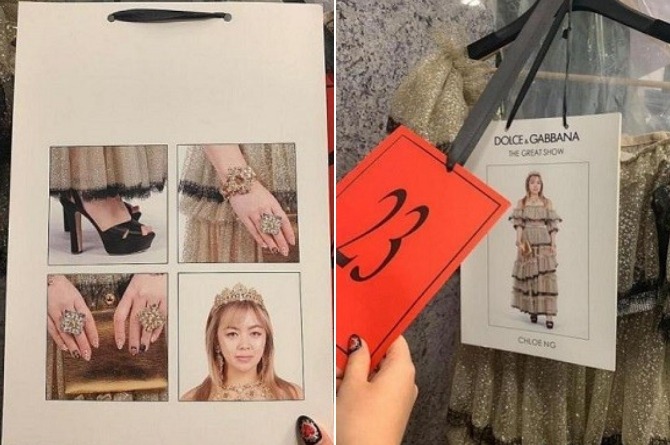 She reportedly told The New Paper from Shanghai: “That was really racist. It makes its Chinese customers feel like the brand just wants their money and this is what it really thinks of the Chinese.”

“It is such a pity, it would have been a great opportunity for many of us, who have never had our countries represented, to represent our countries at such a large show,” she added.

Ng shared that this move may have hurt sentiments, but it also saddened her to see all the efforts of Domenico Dolce go to complete waste.

“It is such a pity to see all their hard work wasted just because of some stupid comments made (by Mr Gabbana). The irony is that the show was meant to be a tribute to China,” she shared.

“…There was no point in continuing with the show.”

Post this ill-fated incident, it remains to be seen if Dolce and Gabbana fashion shows will be welcomes. Or, if they will have as strong a hold on the Chinese markets as they did before.

Because if reports are to be believed, they have vanished from Chinese retail sites and barely a few people are clamouring to get their hands on a D&G products through their brick and mortar shops.

Also read: How to snag designer handbags for reasonable prices in Singapore